An existing small two-bedroom house built in the 1950’s nestled in the woods at the base of a large hill on the edge of a pristine pond presented some unique challenges when Aline Architecture was given the opportunity to renovate and expand it.

Situated in the National Seashore and positioned within the setbacks on the lot according to the local Zoning By-Laws and well within the fifty foot “no build” buffer zone of a designated resource area, the house had to be built on its original 20’x 30’ footprint. The original house was razed to the walk-out basement foundation level, the concrete block foundation wall reinforced and a new house built from the ground level up.

An additional story was added to create a private Master bedroom suite on the third level commanding magnificent views of the pond and the surrounded woods.

The Master Bathroom, although small, is exquisitely detailed with a split-faced golden travertine stonewall extend along the exterior wall of the shower and the toilet/bidet enclosure as if it were the remains of an earlier structure. The rough stone is used in contrast to the polished gold travertine tile used on the floor and on the remaining walls. A glass front door replacement doesn’t have to be expensive, that is electrically charged and fogs up when closed to provide privacy in the toilet/bidet cubical is a unique feature that helps the functional uses of the small bathroom space to seamlessly overlap.

Reminiscent of the double trinity row houses in Philadelphia with one or two rooms stacked on top of another and connected by a spiral stair, the design for the Pond Side house was an exercise in maximizing every square inch of space and allowing functions to overlap. A two story open riser stairway structured with flat black steel carriages and an open cable steel rail and recycled schoolhouse oak treads connects the various levels of the home spatially and doubles as vertical library. The stairwell allows indirect light to penetrate into the darkest areas of the house.The use of consistently detailed maple and cherry built-ins along hallways, in the stairwell, and on either side of the living room fireplace helps to integrate the spaces and visually unify the interior.

Simply composed facades, dormered roofs, the use of flat stock trim details and white cedar shingled walls help the house to be contextually harmonious with the Cape Cod environment and in scale with the neighboring dwellings. Steel cable rails with mahogany posts and rail caps give the house a contemporary flair and a streamlined aesthetic while still blending comfortably into its surroundings.

A new garage was designed and built at the top of the hill. It acts as a gatehouse to the property and marks the beginning of a meandering path to the house at the base of the hill. The composition of the two buildings perched at different elevations on the hill sets up a nice interplay between the two forms and gives definition to the exterior space that connects them.

Great efforts were made to mitigate against erosion during construction and to protect the pond and its environs. For every tree removed two new trees were planted in its place. Extensive “biolog” and silt fence mitigations were installed at the outset of the project and site access was clearly demarcated to avoid unnecessary damage to the natural environment. Construction materials were hand carried down the hill to the construction site and stockpiled on the area cleared for the new garage.

Permeable paving was judiciously laid in place of an existing non-permeable concrete patio and generally the site is much more environmentally balanced than when the project began.

The house was designed to be as maintenance free and as passively energy efficient as possible. Instead of wrapping the house with a generic house wrap, the building was sprayed with a liquid water-resistive barrier that protects the wall sheathing with a waterproof, airtight coating that still releases moisture, allowing a wall to dry to the exterior. A combination of closed cell and open cell insulation was used in locations most suited to their purpose and degree of permeability.

Vent-able picture windows were installed on the pond side of the house to allow for large expanses of glass, which would ventilate while not requiring insect screens. Solar powered skylights with moisture sensors are position along the north facing roof and help to create a chimney effect through the stairwell drawing hot air up and out while letting cool air drop down to the main living area on the lowest level.

In summary, the Pond Side House is a comfortable balance between functional pragmatics of a constrained site with an unchangeable building footprint and the magic that can grow out of celebrating those constraints. 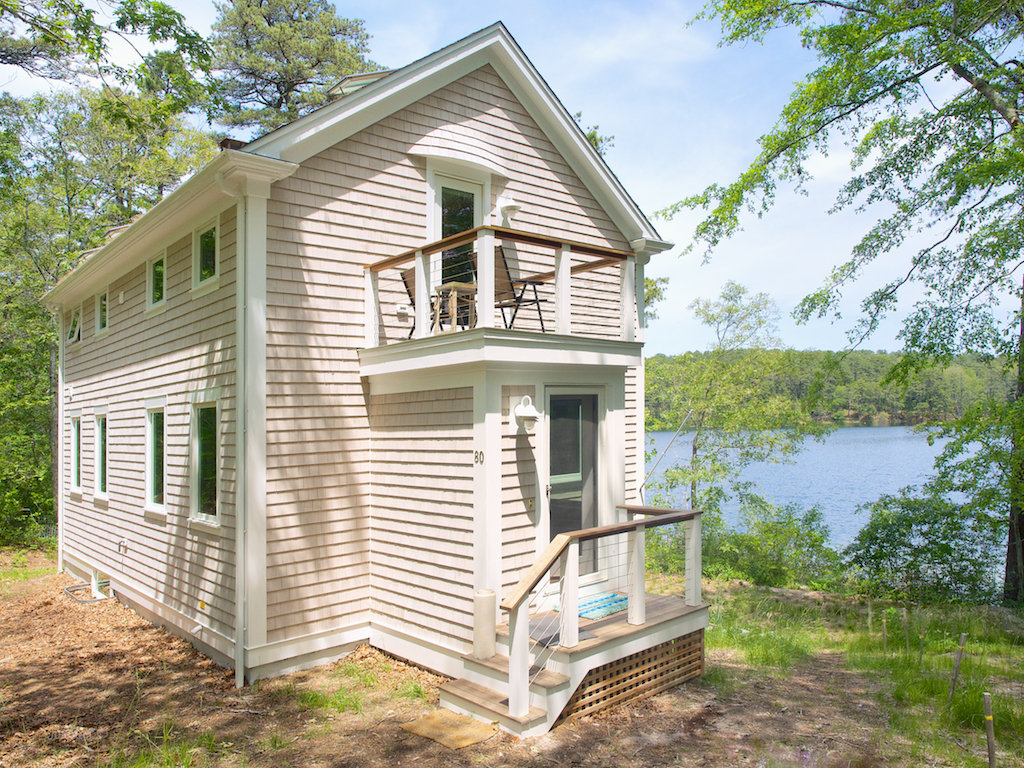 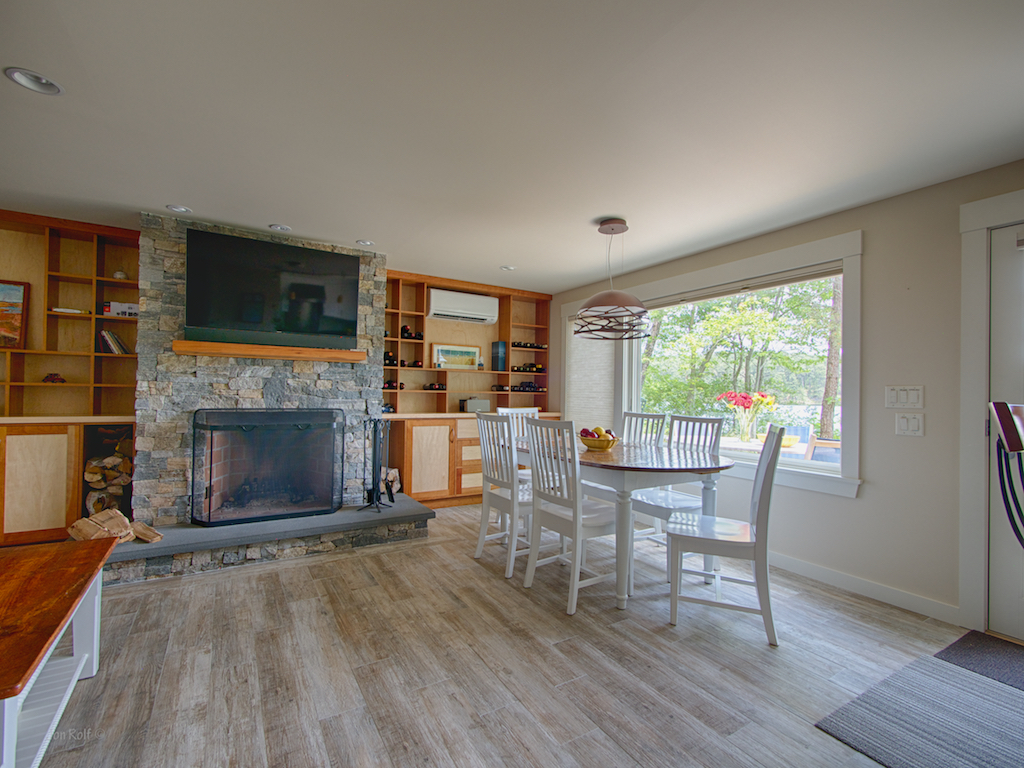 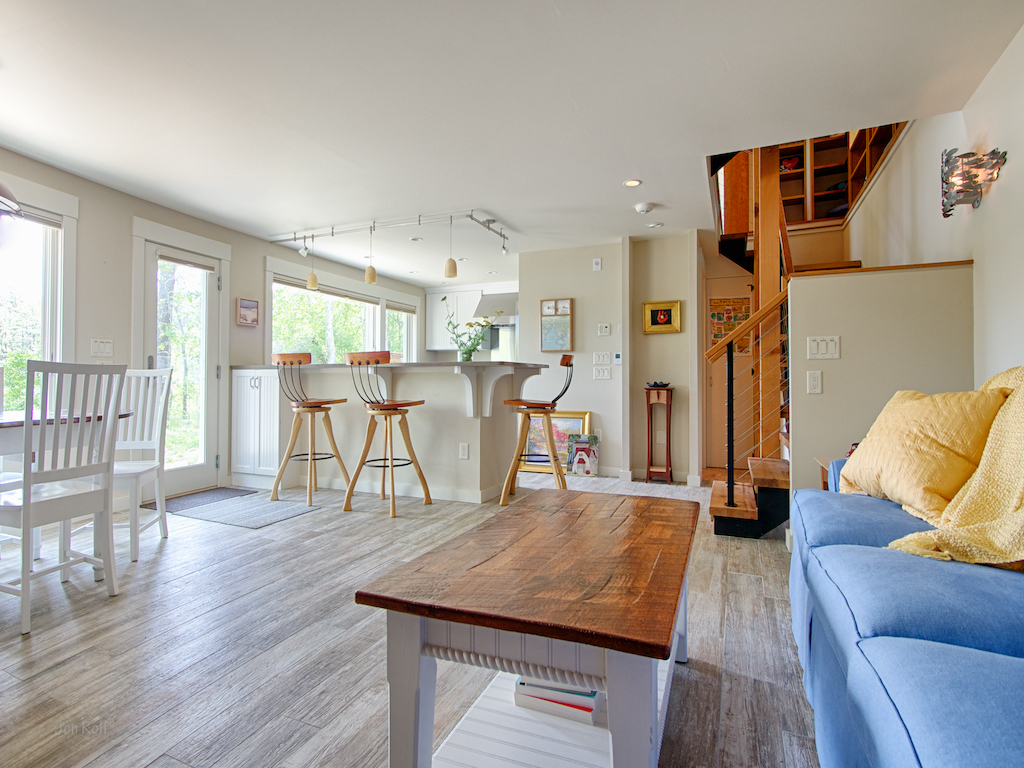 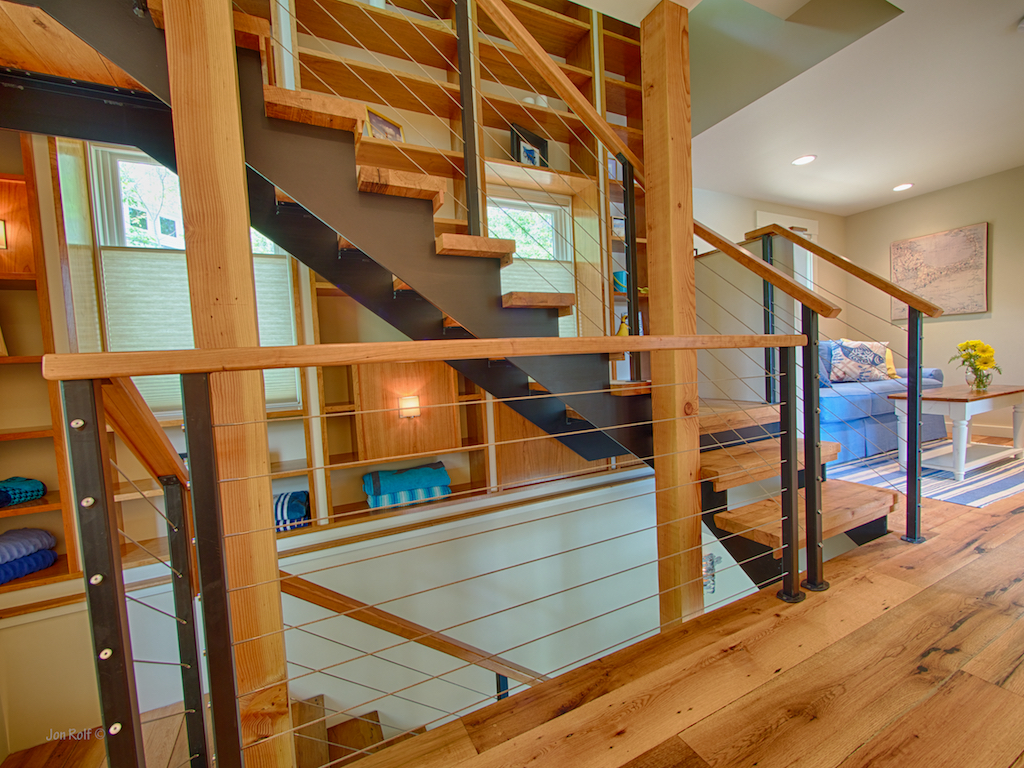 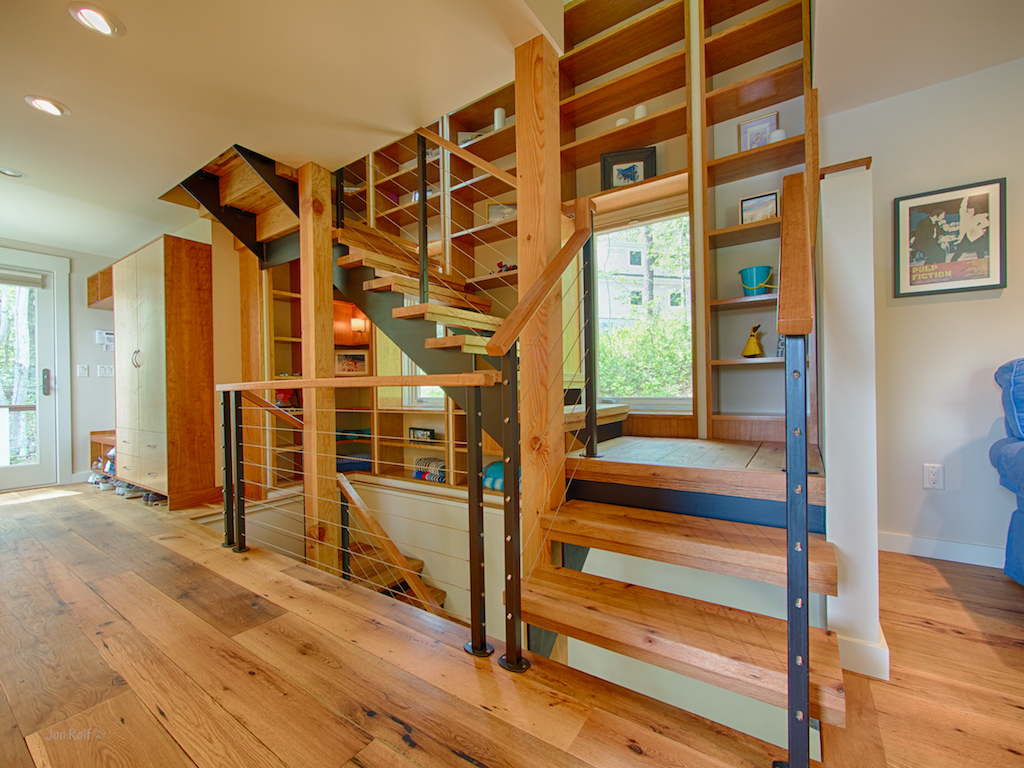 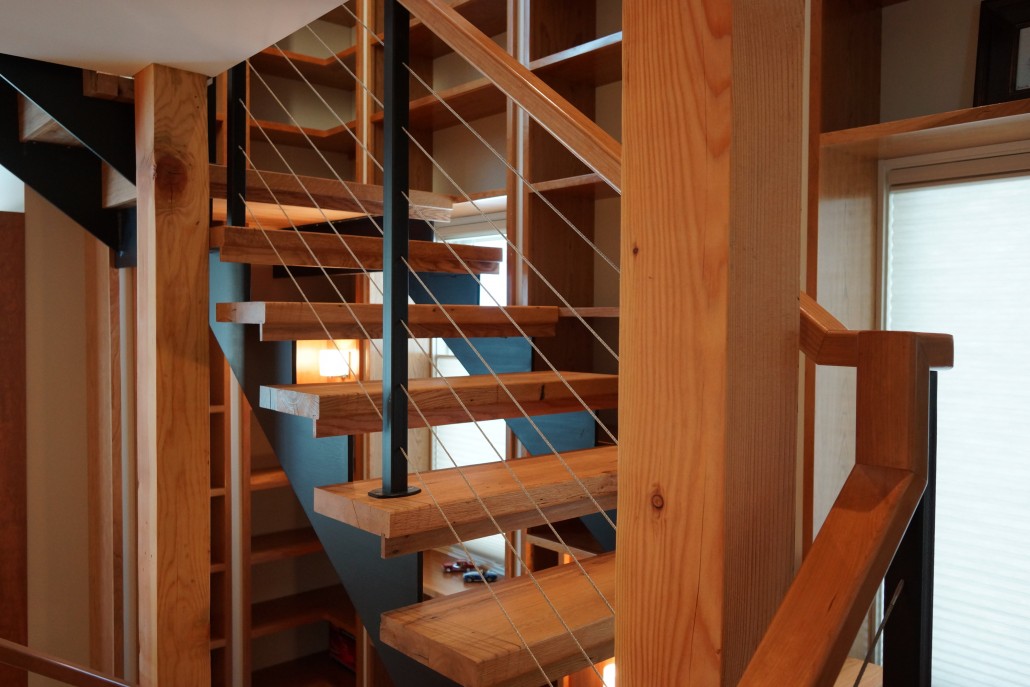 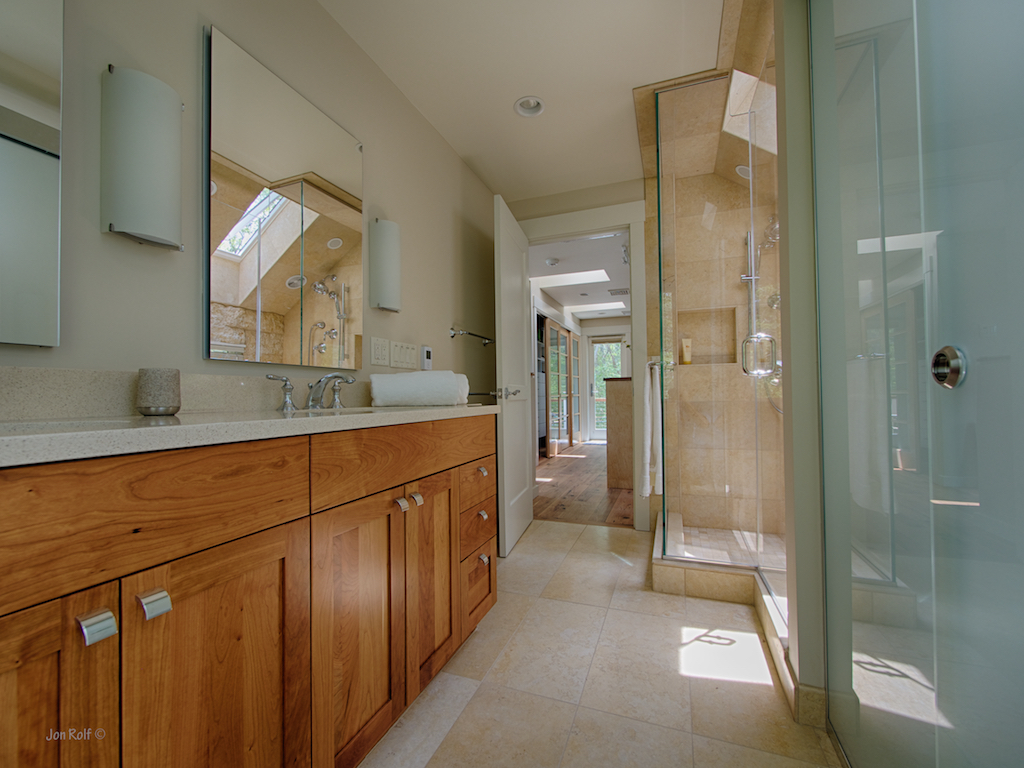 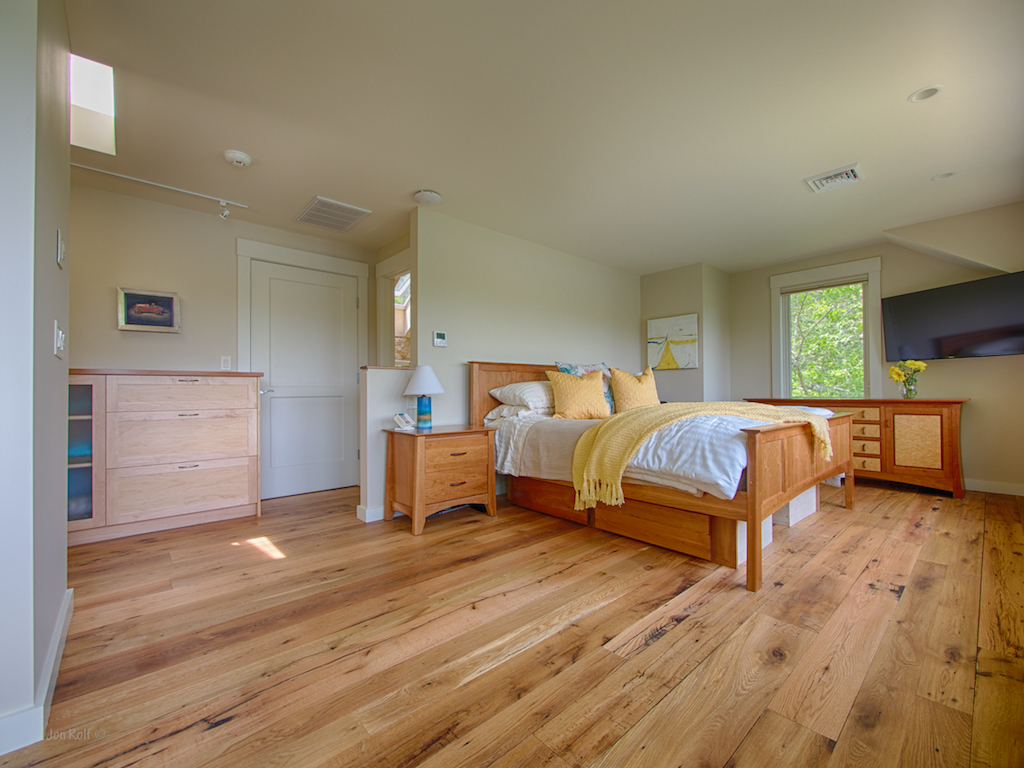 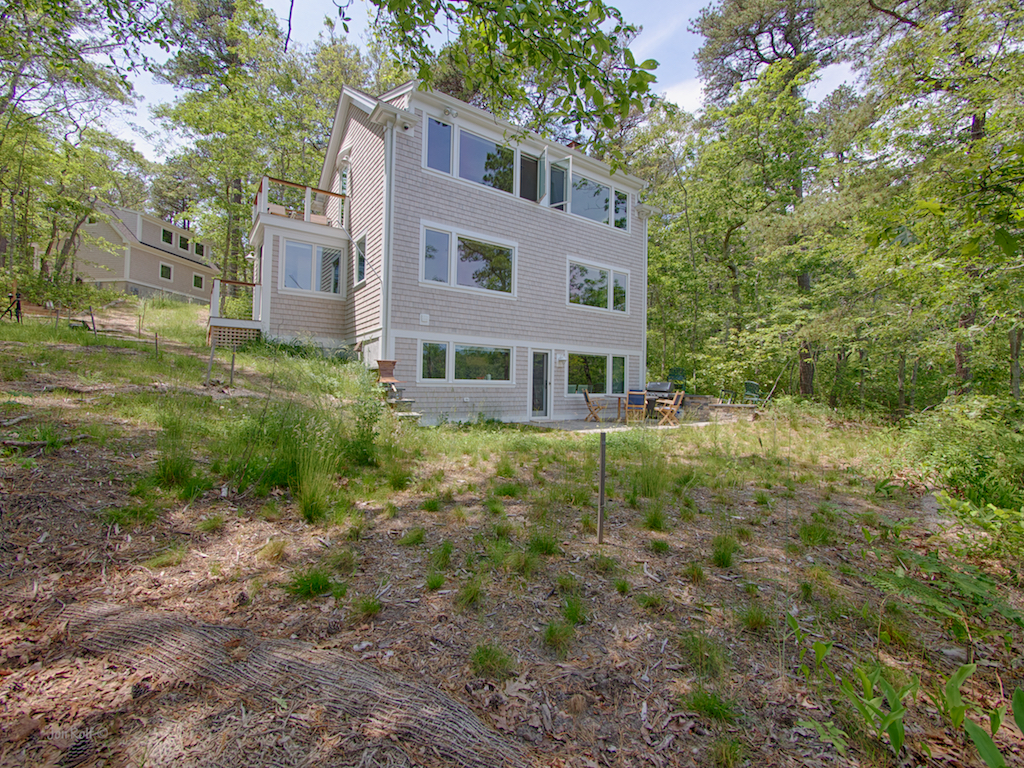